As soon as I placed the popcorn on the floor and sank into the soft velvet cushion of the cinema chair, the lights went off and the rolling curtain displayed a large black and white screen. The large title appeared in front of me – Roman Holiday was about to begin.

Within seconds I was swooped into the dreamy world of this charming classic, following Princess Ann’s rebellious escapade and adventures around Rome.  As I watched Audrey Hepburn zooming on the scooter past Colosseum or sitting on the Spanish Steps with ice cream in hand, I was absolutely taken with the warmth and charm of these iconic scenes. As much as I enjoyed wandering through the romantic streets of Italy’s capital on the screen, I couldn’t help but notice that my own, recent experience in those very same places, were not quite the same.

Visiting Rome on the way back from a family wedding in Assisi, I had a chance to witness my husband’s reactions to discovering Italy’s capital for the first time.  Having been to Rome a number of times myself, I knew that we should stay away from Fontana Di Trevi or the Spanish Steps, which, though stunning and worth visiting, were ridden with hundreds of selfie-crazed tourists pushing each other to take the best shot of themselves with the “must see” landmark in the background. But this being my husband’s first trip to Rome, it was important for him to see the places he’s read about and be able to experience the city for himself. And so we dropped off the bags at the hotel and ventured out, into the scorching 38°C heat, heading towards the steps at Piazza di Spagna and the Trevi fountain. 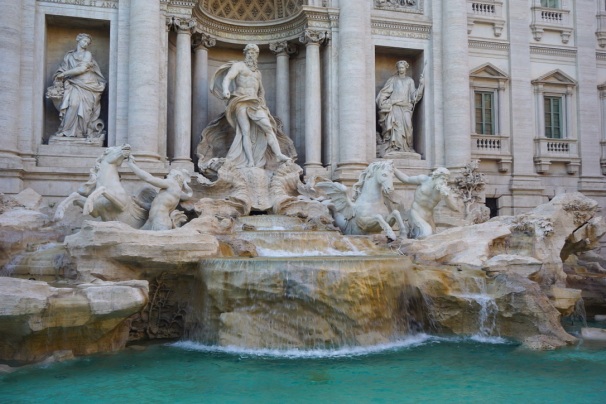 Not surprisingly, it didn’t take long to see the disappointment on his face –  although certainly beautiful, most of the places of historic significance were not as impressive in real life as one would have hoped, mostly due to the crowds of tourists who rather than enjoying the sights seemed more preoccupied with getting a good photo. Resigned and tired, we decided to take a break over a good coffee and ice cream, which proved more difficult to find than we had expected – most of the places surrounding the main tourist attractions were packed and offered very average food accompanied by even worse service from waiters who were clearly fed up with the hordes of foreigners invading their already crowded city.

Looking at my husband’s unimpressed expression, I knew how he was feeling. I remembered my past trips to Rome and how surprised I was to notice that the city I had such high hopes for was not nearly as magical as I had hoped. Luckily, I could also remember the later trips, when I had given up on following in the tourist footsteps and instead just enjoyed Rome. My mind run through the collection of my favourite memories – enjoying the flavoursome coldness of gelato my friend and I enjoyed in a tiny gelateria hidden in a side street close to Pantheon; riding in a friend’s car through the warm Italian night listening to Coldplay and admiring the beautifully lit ruins of the old empire; discovering the strangely beautiful martyrdom fresks on the chipped walls of Santo Stefano di Rotondo. That was the Rome I wanted my husband to take home with him. And so we went off the beaten track and followed our own path.

The first step was to find quality food. Instead of looking at the ratings on the Trip Advisor, I decided to practice my basic Italian and ask locals for recommendations. One of such suggestions led us to a lovely small restaurant, with an ivy-shaded courtyard and delicious pasta dishes. Hidden away from the crowds, Il Baccaro was everything we could have hoped for – excellent food, friendly service and romantic surroundings helped to restore our holiday spirit and our faith in Rome. 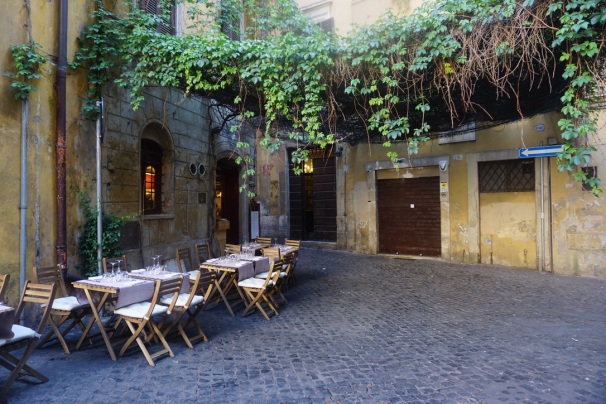 Encouraged by this little gem of a find, we were ready to explore some more. We waited until the sun began to set, the gentle breeze of the evening making the walk much more pleasant. We headed towards the river Tibre, passing through the charming Piazza di Fiori and its restaurants filled with chattering dinners and enticing smells of freshly baked pizza. We walked past astonishing fountains and beautifully carved facades of baroque buildings, breathing in the pure magic of the Italian night. 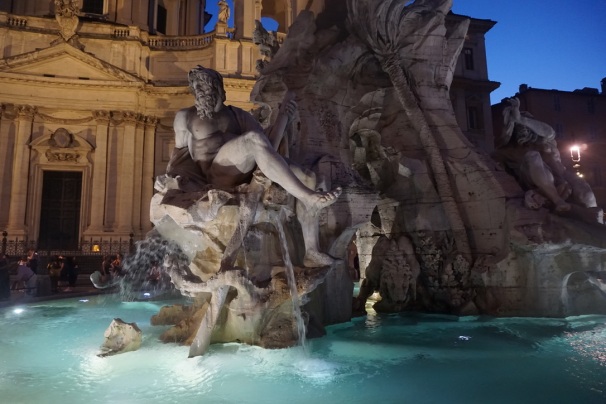 Meandering through the cobbled streets and narrow passageways, we soon reached the river bank. Standing on top of the bridge towering over the river split in two by the Tibre  Island, we watched the rushing water join the steady stream to its right. There was something quite mesmerising in watching these opposing sides of the river become one, like a poetic allegory of the two sides of the fascinating city it was flowing through. 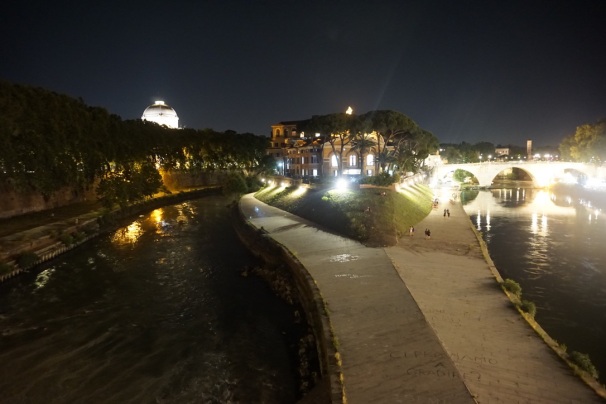 Hugging the river, in the place where Priness Ann danced with the hairdresser, there was now a vibrant night market, with restaurants, bars and stalls selling local crafts. On the hot July night, the spot was a popular with Roman families and couples on dates alike. 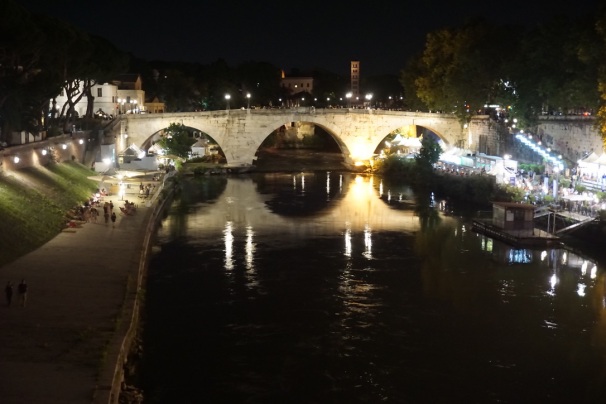 We continued to walk down the charming banks of river Tibre and the bohemian streets of Trastevere neighbourhood, stumbling upon open air cinema, outdoor parties, Jewish quarter and a narrow bridge decorated with a collection of tiny figurines. This was Rome I haven’t seen before and each discovery felt like a little surprise gift that the universe decided to dot across my way. 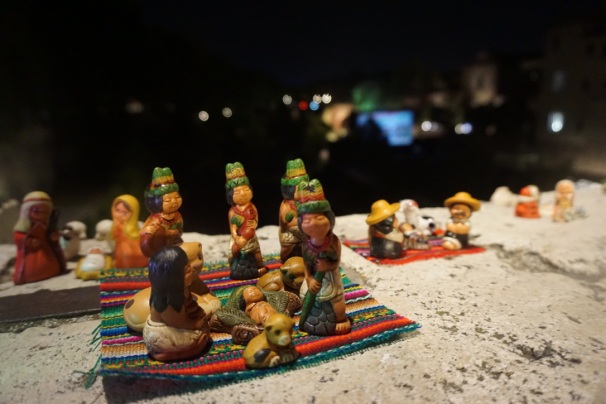 Heading from the river side towards colosseum, we climbed the steep steps of the Capitoline hill and admired the romantically lit ruins on the slopes of Palatine, until we eventually reached Colosseum. 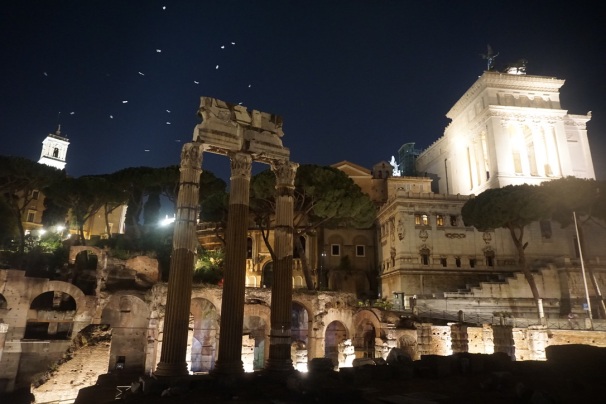 It wasn’t the well-known circular building that seemed to captivate us the most however, but all the sights encountered on our way there. It was all that was unexpected and devoid of our expectation that turned out most captivating. As we walked through the warm night, holding hands and admiring our surroundings, I was in love. In love with my husband, with Rome, with life. 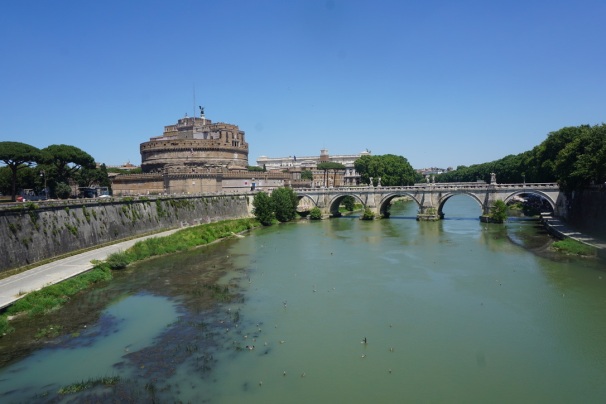 Few weeks after the trip, watching Roman Holiday, I was again on a beautiful journey around Rome, yet again visiting the vibrant outdoor cafes and restaurants filled with families and friends dining till late night, passing by elaborate sculptures adorning majestic fountains and dancing by the picturesque river Tiber. And while what I saw in the movie in the Rome of the 1950s was quite different from what I’ve seen during my Roman holiday, the charm captured in the film was still there, just not in the most obvious places.

Inspired by movies, we often embark on our journey searching for the beauty and magic seen on the screen, often heading to the places we can recognise from film or recommended by friends or travel guides. We search for that perfect moment, hoping that whatever feeling we’re searching will be there waiting for us as soon as we arrive at the destination. We head to Rome wanting to fall in love, but love, just like beauty and magic, can only be found when we stop looking for them in the obvious places. While in the end during our short Roman holiday we got to see it all – Colosseum, Forum Romanum, Pantheon, Fontana di Trevi and many more, it wasn’t those places we will remember but the paths that led to them and the unexpected finds we encountered on the way there. I think that’s the point of beauty –  it is unexpected. Perhaps the true beauty is not where everyone sees it, but it stays hidden, waiting to be discovered. 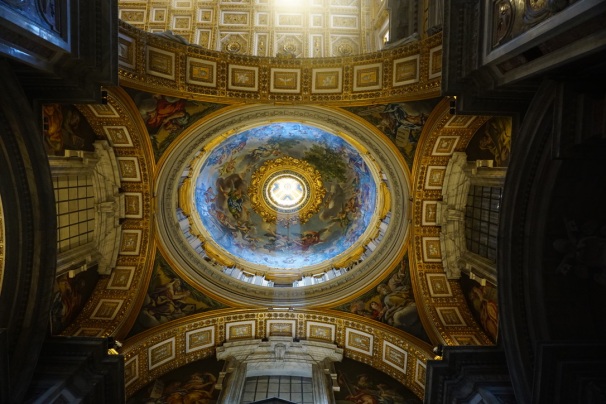