Making time for life in Amsterdam

Here I was again, landing at the Schiphol airport. I was returning to a client I’ve worked for before and was looking forward to working in Amsterdam again. Although I usually prefer working more locally, the Netherland’s capital has proven to be one of the perfect place to work from.

Similar to the Scandinavian countries, the Netherlands seemed to share my belief in the importance of the work-life balance. The way I see it, is that while it’s important to work hard, it is equally crucial to be able to recharge in the evening in order to start a new day on a full tank. While the value of work-life balance is often forgotten in a busy metropolis like London, where people often prefer to stay at work longer if only just to avoid the rush hour on the tube, the Dutch way of working was quite different.

During the day my Dutch colleagues were engrossed in their work, efficiently going through their workloads and meetings, yet by 5 pm the office was almost deserted. Me and my British colleagues would continue working for a bit longer, but the general atmosphere of sensible work ethic would soon kick in and unless there was a pressing need to finish a pending piece of work, we would soon be heading back to our hotels too.

As I was sitting in the taxi, heading back to town, I began to feel a mix of gratitude and sense of purpose. I was glad I was working in an environment that allowed me to finish work when it was still bright outside and that I knew better than to just sit in my hotel room all evening watching Netflix or replying to emails. It reminded me of the conversation I had a month earlier in Geneva, when a colleague asked how I cope with working abroad on the regular basis. I told her that I had discovered quite early on that you need to create an alternative, positive routine when your work includes frequent travel. You need a way to make your reality in the other country feel more than just work. It needs to feel like an equal part of your life as the time you spend back home. Otherwise you will grow tired and resentful, and before you know it, your discontent will find its way to your work.

In the evening, as I was walking through the city centre planning fun things to do in this great city for the rest of the week, I suddenly remembered a conversation that took place earlier that day in the office. A British colleague was speaking to a Dutch one, telling him he’s never been to Amsterdam’s city centre as he stays in a hotel near the client site and wouldn’t know where to begin and if there’s even anything worth seeing in the evening as he assumed most sights would be closed. I could not believe what I was hearing. Here we were, staying just minutes from the busy centre of one of the greatest European cities and he had no idea how much this place had to offer! And so I decided, I would write a short guide to visiting Amsterdam when on business trip to make sure no one ever misses their chance to see this wonderful city.

Here are my five essential steps to making the most of your business trip to Amsterdam.

It might be tempting to go for the first comfortable hotel you find in the vicinity of your office and to continue returning to a place well known each time you come back to town. While it is certainly appealing to stay in a hotel you already checked out in the past and know what to expect from, it will limit your chances of seeing new parts of the town and is a slippery slope to a life on auto-pilot. Coming to Amsterdam in April, I decided to embrace the lack of available rooms in the hotel I knew from my earlier project and use it as an opportunity to visit parts of the city I haven’t explored before. I was in particular pleased with two quirky hotels that positively surprised me with their decor as well as location. 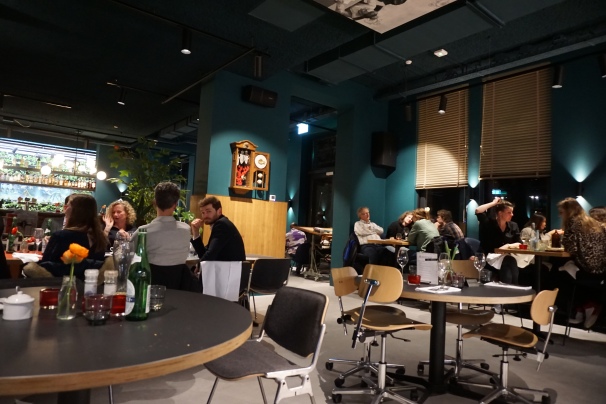 Conscious Hotel, where I stayed last week, was perfectly situated in the middle of Westerpark, which with the start of the spring invited morning walks and welcomed me with the blooming flowers and greenery I could see each morning from the bright windows of my room. The minimalist decor, vegan cosmetics in the room’s bathroom and the quirky atmosphere perfectly fitted the hotel that was placed in Amsterdam’s popular park and hosted a number of independent restaurants, cosy bars and an arts cinema.

Another hidden gem was the Volkshotel in the eastern part of the city. This hotel/co-working space boasted a very young, artistic atmosphere accentuated with the rooftop bar and hot tub, yoga classes and live music events.

What was most unique about this hipster, LGBT-friendly, eclectic space however, was its unique design. From rooms featuring original drawings of a left-wing cartoonist from the 60s who used to have an office in one of the rooms, to a nature-inspired modern oasis with a bathtub towering over the room, Volkshotel most certainly provided everything needed to unwind at the end of a busy day.

Throughout the years of working in UK, I’ve heard numerous people boast that they work hard and play even harder, which usually meant they liked to go out in the evening and get hammered.  Each to their own, but my version of “work hard, play hard” includes carrying a camera wherever I go and hitting the city centre as soon as I am done with work for the day. In Amsterdam that meant that even if I finished work around 6.30 pm, I could still be exploring the city’s canals by 7 pm.

I loved to walk around the Prinsengracht canal and would recommend just going for a stroll around the whole of the picturesque Jordaan neighbourhood when you get a chance. You can also admire the city’s water-filled landscape and the iconic crooked houses from a boat during one of the many late night canal tours. For the sightseeing hungry, Anne Frank’s House  and the nearby Museum of Cheese, that are open past the working hours, will be perfect options.

Alternatively, you can head to the Centraal station and turn into Zeedijk street, where you will find many old-fashioned pubs and cute cafes that you will never want to leave. 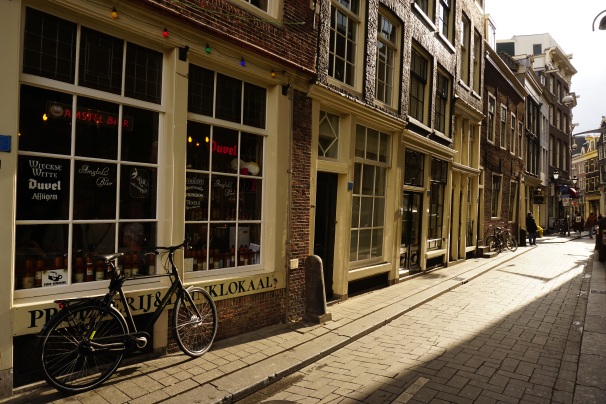 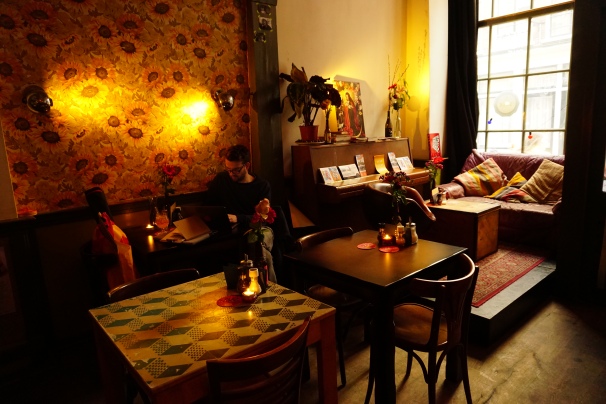 3.Get out of the city

For the more adventurous business people or for the lucky ones who get to finish work at a sensible time, getting out of Amsterdam might be an interesting option. If you’re traveling in the spring and summer, make the most of the longer days by visiting Keukenhoff, a botanical garden famous for its tulips. The park is only a short bus ride from both Schiphol airport and the city centre, so you can unwind after work in the nature. If your trip falls on the colder months, head to Haarlem, a picturesque town just 15-30 minute uber ride from Amsterdam. 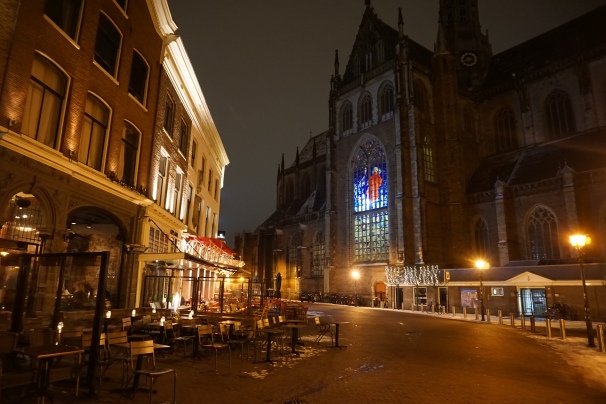 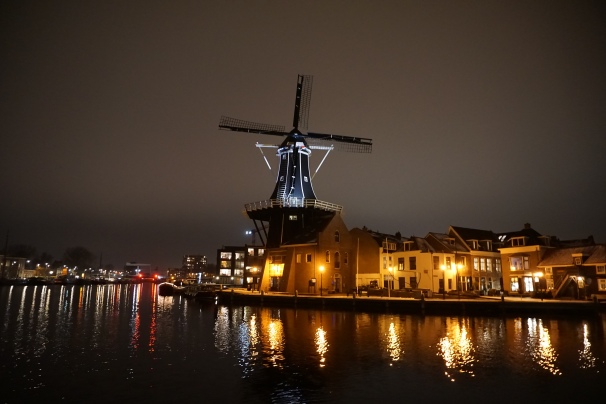 Even if you had a long day that left you with no energy to go and explore the city, you can always unwind in front of a good movie in one of the many Amsterdam’s fantastic cinemas. Whether you choose the remarkable Eye Film cinema and museum situated on the northern bank, Westerpark’s cosy Het Ketelhuis with its eclectic bar or the breathtaking Art Nouveau Pathe Tuchinky, Amsterdam cinemas will keep your evenings interesting. Since all the movies in Netherlands are shown in the original language with Dutch subtitles, you get to enjoy all the latest releases same way you would back home. So forget about Netflix and watch the movies the way they’re meant to be viewed – on the big screen. 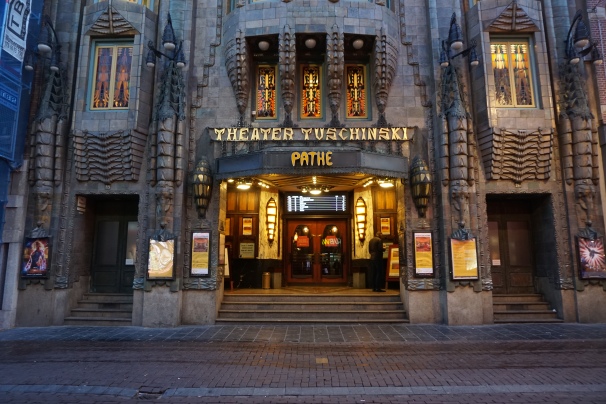 And what if even cinema proves to be too much on some days? You can always eat like a local! Between the great selection of Dutch pancakes served anywhere in the city centre and the delicious bitterballen, hot potato and meat croquettes served with mustard, it is easy to get a step closer to the wonderful culture of the Netherlands. 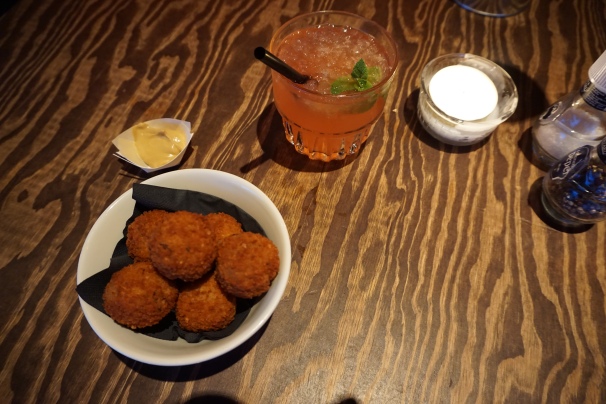 So leave your hotel room, step out of your comfort zone and go explore! Make most of your business trip and the city you’re in. Life is too short to miss it.

5 comments on “Making time for life in Amsterdam”