After two weeks of working long days and weekends, yesterday I finally had a day to myself. Being on a business trip in Bangkok has been an interesting experience – I got to work with colleagues from across the globe, got to know some lovely local people and enjoyed Thailand’s exquisite food and hospitality. Working in the Thai capital, however also came with the less pleasant aspects such as the unbelievable traffic jams causing my journey to work to take between 1.5 and 3 hours (one way!) or the exhausting mix of 33°C and 75% humidity, which left one wandering town in what felt like a sauna. 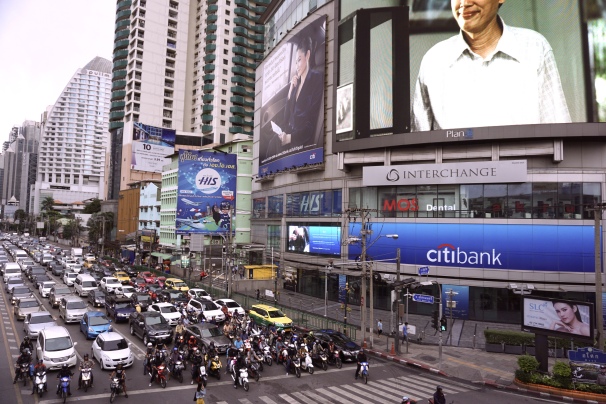 Between the hot, long and stressful days and wasting precious time in traffic, it was easy to forget how incredibly lucky I was to have been given the opportunity to work in this amazing city for three weeks. With the arrival of the weekend however, I managed to take a step back from the havoc of the last few weeks and simply see Bangkok for all its wonders. It was still just as hot and busy, but suddenly I felt no need to change it, it was perfect just the way it was.

Having had a few hours to relax, I began to notice the city and the life around me with a new degree of wonder and gratitude. I couldn’t wait to explore the vibrant world of Bangkok’s markets and temples, absorbing the city’s energy wherever I’ve gone. I had no complaints, no plans, I simply went where the paths lead me. Having run into a colleague at the hotel breakfast, I was traveling through the city with my new friend, which sometimes meant that I had to adjust my pace to theirs. I didn’t mind though, because having company also meant seeing things through somebody else’s eyes and learning.

In the spirit of curiosity and acceptance, I didn’t protest even when my colleague suggested that we hire a tour guide  to walk with us around the Wat Pho temple complex, at which we arrived in the late afternoon. After the visit to the reclining Buddha and having learnt more about the intricate relationship between the Thai massage and Buddhism, we followed the short, elderly man who was guiding us along the rows of golden statues to a temple where the monks were just starting their daily meditation. 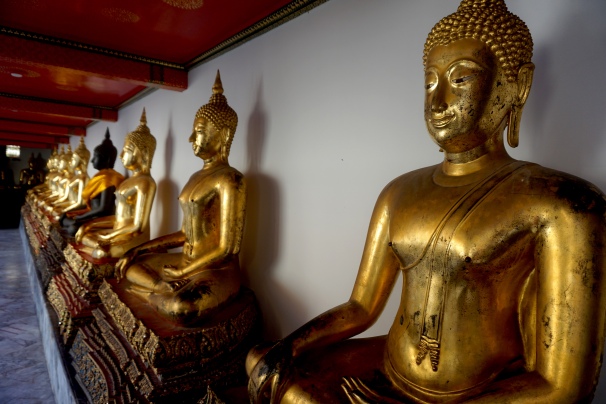 As we were approaching the raised building, the air began to fill with a low, rhythmic timbre of the voices reciting Buddhist mantras. Inside, a group of orange-clad men with shaved heads sat on the floor turning their prayers into a calming melody. I removed my shoes and sat beside them charmed. Simply listening, I  allowed my mind to empty of all thoughts, letting my soul to fill with the peaceful energy carried by the wave of their voices. For the first time in a long while, I felt relaxed.

Before we left the complex, I asked the tour guide about the monk I’ve seen on the street few days earlier. He was blessing a man with the food cart, who offered him durian fruit. The scene prompted my curiosity about monks’ daily routine and diet. In a heavy Thai accent, the guide explained that every day between 6 and 8 am you can see monks wandering the streets of the city collecting food offerings from the Thais who wish to receive good merit to strengthen their karma. With the alms however, comes an important lesson in Buddhism – acceptance.  A monk cannot choose what to eat, they must receive with gratitude whatever alms are offered, which often means accepting meat as well. Contrary to many people’s belief, Theravada Buddhist monks in Thailand are not vegetarian –  they simply don’t have the luxury of choice and they take whatever they’ve been given. 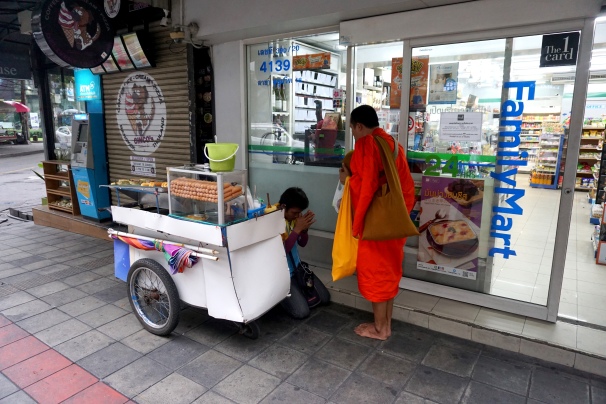 On the way back to the hotel,  my thoughts continued to go back to Wat Pho. I couldn’t help but think of the Buddhist monks and how serene they appeared to be whenever I’ve seen them. I found myself wishing I could feel this sense of tranquility on daily basis too, instead of the frustration and stress that had been filling my mind Monday to Friday. I realised that it was precisely that wish that was stopping me from achieving the peacefulness I so badly craved –  I would never be calm until I learnt to accept that some situations are not ours to change. We can only influence what we have power to change, which is ourselves. Perhaps instead of wishing to change things around me, I could learn to accept them as they are – like the food offerings accepted by the monks. What if I could start my day not thinking of what I hope it will bring, but simply blessing whatever life offers, replacing all the “if only”s with a few more “thank you”s? Perhaps the only path to true happiness is the one of acceptance and gratitude.

17 comments on “Thai Lessons in Acceptance”