Gdynia – All in one

Booking spontaneous holidays in the middle of the summer usually means extortionate prices and the necessity to pick between the “beach but no culture” option or complaining about being trapped in an oven-like museum on a city break. Luckily there is one more solution that offers both lovely sandy beaches and plenty of cultural pursuits to pick from.

Gdynia, a small city in the north of Poland, may seem like a surprising choice for a summer break, but it is a great one for anyone wanting to have it all. Within just a two-hour flight from London you can be transported from the stuffy heart of the UK’s capital to the land of white sandy beaches, great natural beauty and interesting history. Arriving at Gdansk, you can travel to the city’s old town, head straight to the beach in Gdynia or explore Sopot’s vibrant nightlife. There’s plenty to choose from, as due to their close proximity these three cities function as one collective metropolis known as Tricity. This means that those who live in Gdynia, may be seen going for a dinner in Gdansk while grabbing a coffee afterwards in Sopot. While Gdansk is a more well-known tourist destination, I would recommend you to book your stay in Gdynia and travel to Gdansk for a one day sightseeing trip. With the Gdansk airport being located in between all three cities, you can reach your hotel within 30 minutes wherever it is. You also won’t go broke by taking uber, as the ride to Gdynia’s city centre is going to cost you less than £10.

If you’re heading to Gdynia just for the weekend, make sure to spend 2-3 hours walking around Gdansk’s old town, admiring its beautiful old townhouses and sipping delicious coffee in some of its quaint independent coffee shops. If you have time, visit the museum of the World War II for a history lesson or head to Oliwa zoo or Sopot Aquapark if you’re traveling with kids. Whatever you choose, make sure you eat plenty of local food and remember that in Poland it’s usually the most simple things that taste the best!

After a busy day in Gdansk’s old town, head back to Gdynia for some delicious pierogi, polish dumplings, in the Pierożek. If you’re feeling only peckish, try the Polish fast food speciality – zapiekanka, which is a crossover between a French baguette and a pizza (only better!). For those on a budge or curious of Poland’s past I would recommend visiting Bar Mleczny Słoneczny, a post-communist relic on the corner of the Władysława IV and Zwirki i Wigury street. Make sure to try one of the classics like or żurek or barszcz soup and the bigos or schabowy with a set of vegetable surówki. For desert, head to one of Gdynia’s musts – Pączuś for mouthwatering polish donuts. There’s a lot to choose from, but my recommendation would be the pączek z różą, a classic fluffy donut filled with rose confiture.

While staying in Gdynia be sure to visit the Museum of Immigration and take the funicular to the top of the Kamienna Góra, where the signature cross towers over the city. The cross, which was initially raised as an orientation point and an incentive for reflection for those on the sea, was destroyed by first by the Gestapo during the WWII and the again during communist regime, only to be raised again and again just like Poland was raising above its unfortunate past. In addition to the symbolism of the place, Kamienna Góra is also an excellent view point from which you can admire the sea. 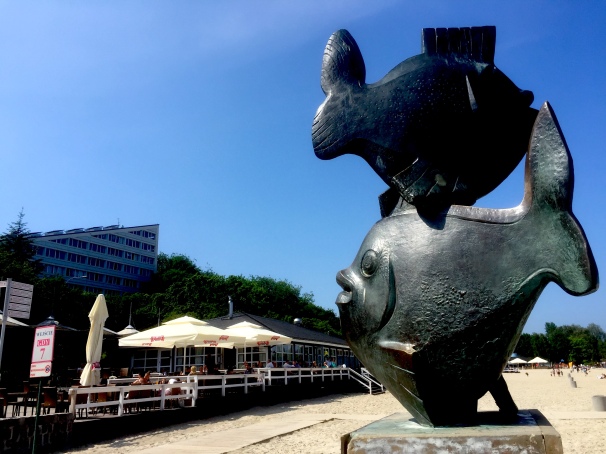 Heading past the Music Theatre you will enter Gdynia’s best – the seaside walk leading to the boulevard. With the sea on one side and the forrest on the other, this is a perfect place to unwind. If you’re staying in Gdynia’s city centre, the boulevard will also be a great place for a morning run or a walk (you can even continue walking to the little beach known as the “dzika” (wild) beach, a little further down, which continues all the way to Sopot. By the seaside you will find a lot of nice cafes and bars to enjoy a great drink for affordable price. “Contrast” is one of Gdynia’s favourites, due to its relaxed atmosphere, maritime theme and steps leading directly onto the beach. On a hot day, it is also worth getting some gofry, polish waffles, or refresh with some natural ice cream from Słony Karmel. No matter what your preference, Gdynia will have plenty to offer for everyone. If the evening pub crowl by the sea is not your scene, enjoy a musical in the Music Theatre or watch a movie in the independent Kino Studyjne where for just £3.50 you can watch the latest cinematic pearls (in Poland all cinemas have subtitles so you can enjoy all movies in English same way you’d back home). 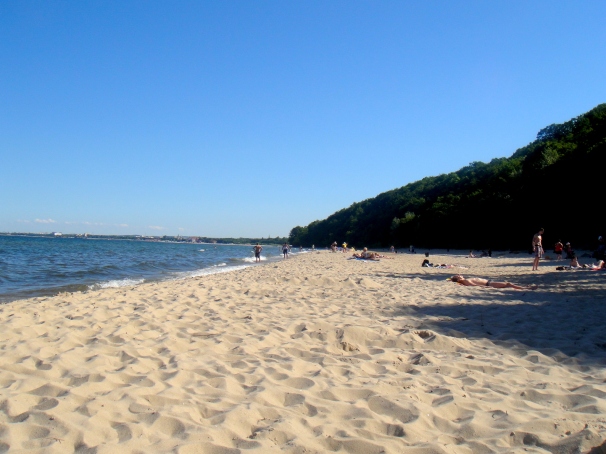 If despite the vicinity of the sea the heat is still getting to you, you can hop on the wodolot  and let this water bus take you to Hel or Jastarnia, small seaside locations popular in the summer. Located on the northernmost tip of Poland, the Hel peninsula is a strip of land with the bay on one side and open Baltic Sea on the other (at some points it is so narrow that you can see the water on both sides at the same time). Expect wide sandy beaches appearing from behind pine forests and refreshingly cold water ideal for swimming on a hot day.

While summers tend to be hot and sunny in Poland, if you happen to be visiting Gdynia on one of the colder days, you may want to visit the national park in  Łeba with its beautiful sand dunes or wonder through one of the many beautiful forests and countrysides that the Tricity is full of.

Personally however, I think that the Baltic Sea is beautiful in any weather and there is enough in Gdynia to keep you busy all year round.

Whether you’re looking for an affordable beach holiday or just struggling with an inspiration for a weekend away, give Gdynia a chance. Sometime it is the less popular option that can end up being the right choice for you.