I knew Japan was going to be something special from the moment I saw the majestic snow-covered peak  of Mount Fuji towering over the clouds. The day was only just waking up from its slumber, but the iconic mountain appeared already in full readiness for what life had in store. Strong, proud and solitary – just like Japan itself. 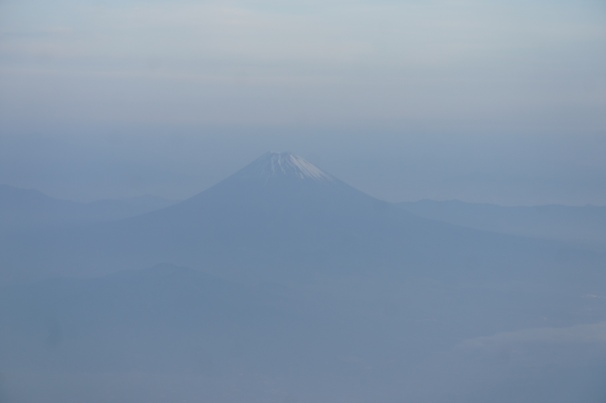 I’m not sure what I had expected the country to be. On one hand Japan has always been presented as the country of traditions and rich culture, on the other Western media liked to depict it as the epicentre of weird trends and even stranger fetishes. How those two extremes would work in unison, I wasn’t sure, but I was soon to find that out.

I experienced my first culture shock when I entered… the toilet at Haneda Airport. I never really paid much attention to public toilets before, but the one at Tokyo’s international airport turned out to be surprisingly informative about Japanese society. You see, instead of the usual toilet, each cubicle contained a highly computerised washlet. These all-singing, all-dancing devices not only played the soothing water sounds while you used them, but also washed and dried  any desired part of your derrièr. After Chinese squatting toilets, this was heaven. Aside from clearly valuing cleanliness and technology, Japanese must have also been very thoughtful people as in the cubicle I noticed a small holder for the baby. Mothers around the world struggle when having to use the facilities while not having where to leave the baby, and now Japan had a solution to that problem –  a special suspension where a mum could safely “deposit” her infant for a few minutes and use the toilet at peace. The family-friendly and forward-thinking efficiency of this island nation became apparent also when I spotted, leaving the washroom, a child-sized urinals for little men who inevitably have to visit the ladies room with their mums. I was seriously impressed!

Between the fancy toilets, traditionally decorated restaurants serving good food and indoor growing plants, Haneda was  the only airport I was reluctant to leave. But Tokyo was calling, and it was time to see what it had to offer.

We got into the underground right in time for the morning rush hour. Accustomed to London’s busyness, tightly squeezed commuters reminded us of home. The only difference was the impressive number of people sleeping while standing – a skill I haven’t yet seen back home. That and the tiny books everyone who was not asleep seemed to be reading. The pocket sized books all had beautiful material covers, keeping reader’s choices safely  hidden from the curious gazes of others.

Upon reaching Shimbashi station, where we had to change trains, we decided to hide from the never-ending wave of bodies hurrying to work in a small cafe at the station. The underground system in Tokyo seemed more complicated to navigate than the one in London and definitely required much more walking to get from one line to another. Luckily, tired passengers could take a break from almost half-a-kilometre walk in one of the many cafes that most of the large stations had conveniently placed within the underground corridors. It was in one of such places that we took refuge until the human traffic began to slow down to more manageable size and we decided it was safe to board the train again.

Since the place we rented through Airbnb was not available till later in the day, we decided to head to a nearby Nihombashi and start exploring the city. Thanks to my newly found minimalism we had only hand luggage, and so walking around was not a problem. Our first stop was a Suitengu Shrine.

This Shinto place of worship turned out to be known for providing safe delivery during childbirth and was popular with families praying for children. The traditional appearance of the shrine stood in sharp contrast to the modern surroundings and the air-conditioned centre for the worshippers, but  everything made sense again once I found out that the existing shrine was built only a few years ago, after the original building was burnt down by the fire of the Great Earthquake in 1923.

Although the complex features a number of places for prayer, such as the statue of a female dog and her puppy or a dragon fountain places in front a machine dispensing drinks, popular across Japan, most visitors would begin at the main shrine. It is a custom for the worshippers to pull one of the colourful hanging ropes known as Suzunoo to summon the deities. The material of the ropes is changed regularly and given to pregnant women for an easy childbirth. After the rope is pulled and a sound of a bell can be heard, a monetary offering should be placed in a box. The worshipper then takes two deep bows, claps their hands twice and takes another deep bow. 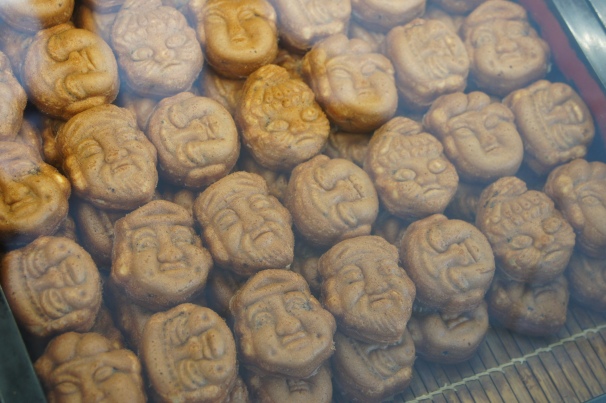 After visit to the shrine, we carried on walking around the neighbourhood, where we passed local vendors selling Ningyo-yaki. These traditional cookies filled with bean paste, were famously shaped after shichifukujin, i.e. seven gods of good luck, and became a popular treat in the Nihonbashi-ningyocho area.

Throughout our walk, the tradition and modernity continued to blend. In between newly built blocks of flats one could still find old wooden houses safely tucked in, to remind the passersby about Tokyo’s past. I was in love with these small buildings, so different from any house I’ve seen so far. This was the Japan I was hoping to see. 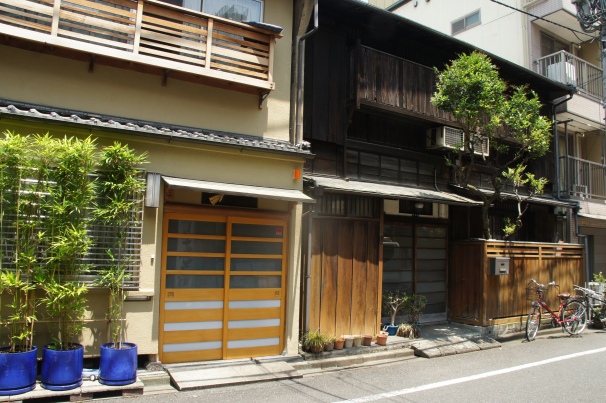 Just like one could not escape the past, so was the religion present at every step. Every few meters we would find a simple stone gate surrounded by greenery, which usually led to a tiny shrine.  In the unbearable heat of Japanese summer, these shaded places of prayer offered a temporary escape from the sun. There was also something beautiful about these pockets of tradition hidden in the side streets. Entering each new shrine, I felt like I was discovering a new secret, unsure what will await me at the end of the gravel path. I found particularly interesting the stone statutes of fox, or Kitsune. This animal is perceived in Japan as faithful guardians and often symbolise friendship and love, although some folklore stories depict them as supernatural beings able to take on human form. Today they are popular features of Shinto shrines, as they are believed to be the messengers of Inari, a spirit of fertility, agriculture and general success. 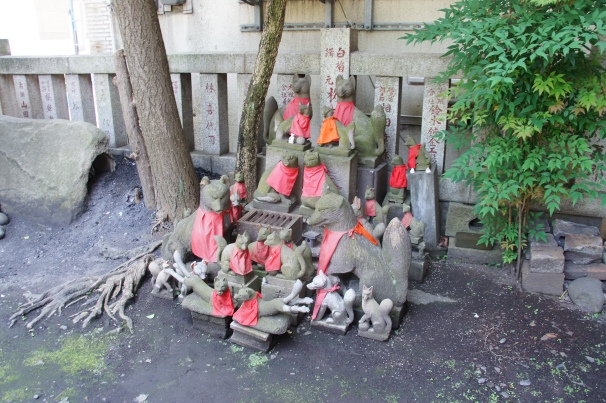 Having explored the area and sheltered from the heat in a cosy Bookshelf cafe, it was time to head to Asakusabashi, where we booked our accommodation.

Even though the place was only minutes away from the underground station, we had problems finding the address we were given. The Japanese  system is not the most straightforward to follow as instead of the usual street names, the address usually includes Chōme, which is the numbered divisions of a Chō, the neighbourhood, and is further divided into numbered Banchi, which are not very intuitive to a foreigner. It took us a long time to find the right area, and we found the house we were looking for only thanks to a lovely man working in a nearby restaurant who left his place of work to walk us all the way to our rented property.

We entered the code we were given to a small box outside the house and took out the keys. As soon as we entered a two-storey square building, we found ourselves in a tiny hall with space for shoes. We removed our trainers and placed them on a small shelf before walking up the stairs. Despite its compact size, the flat was arranged in a smart manner, making the most of the available space. I took a quick shower, packed the mobile wi-fi that came with the flat into my bag and headed to Shibuya.

In between the busy shopping malls of  Tokyo’s main commercial and business centre we finally managed to find a break from the overwhelming consumerism in the nearby small streets off the Shinjuku station. The narrow alleys of Golden Gai were filled with dozens of tiny restaurants. The few square metres of kitchen were surrounded by tightly arranged chairs, each occupied by Edokko, eating their dinners at the counters. Many of these tiny drinking dens serve only their regular customers, so it is safest to enter one that boasts a menu in English. The food served with the local drinks usually takes a form similar to a Japanese version of tapas, and includes for example a number of bite sized meat skewers, known as kushiyaki, and barbecued quail eggs. The area used to be known as a red light district, but changed into a popular drinking place since 1958 when prostitution became illegal. In the 1980s, when many places in Tokyo were being burnt down by Yakuza in attempt to free up the land so that developers could purchase it, the Golden Gai managed to survive thanks to its influential supporters guarding the area each night.

Although prostitution may have been officially banned, Shinjuku and Shibuya were still filled with sexual accents, ranging from hyper-sexualised manga characters on the neon billboards to scantly clad girls inviting potential visitors to bars and Pachinko game centres.

Despite its busyness, the area seemed devoid of real life. Its open-late shops and fast food restaurants offering a cheap entertainment, a way to forget about the emptiness of one’s life in the busy metropolis, the crowds allowing one to forget about their loneliness.

On the way back  to Asakusabashi we shared our journey with the tired workers and drunk businessmen. Tokyo commuters started and ended their day sleeping on the trains. Even when drunk, Japanese  remained polite and didn’t really bother anyone; many of them just quietly going to sleep on the platform or the streets surrounding the station.

Looking at the sleeping silhouettes I couldn’t help but think about the state of the world. We work ourselves sick, drive ourselves to exhaustion so that we can spend every waking moment either drinking to forget our sorrows or filling the void in our life with shopping for things we don’t really need. Tokyo, London, New York – the dream cities. Places everyone wants to live, hoping for a better future, not realising the price their dreams are likely to come at.

I thought back to my life in London, the unhealthy habits I once had and how much most of my clients were still struggling with well-being and work-life balance. I considered myself lucky as I took a different path, moved to a lovely green quiet area just minutes away from the centre, learnt to put health over profit and began my journey to minimalism. Still, I realised that just like the world I was living in, I still had a long way to go.

As my husband and I got off the underground and walked down the quiet streets of Asakusabashi, I felt grateful for the life I have and for the peace of that summer night in Tokyo. I promised myself to remember that feeling and the contrast to the tiring, busy lifestyle I got a glimpse of that day. We all have choice in our life, we can shape our life according to our values, and just like Japan, we can decide how much we want to run after money, and how much space we are willing to leave to traditional values and a slow, but meaningful life.