The walls of freedom

To me freedom has always meant independence, lack of restrictions.

Our visit to Peshawar centered around Bala Hissar. This well-preserved Fort, believed by some to date more than 2000 years back, is one of the most characteristic aspects of the city’s landscape.  The dusty reddish fortress dominates the city, reminding its citizens about their history, as well as the power of the military. The building is currently in the hands of the Armed Forces of Pakistan and is not open to public.

We entered the fort after the sun had set. Our cars slowly climbed up the winding road within Bala Hissar’s walls. At the top, awaiting us was an amazing view. A low-rise building surmounted by a row of white columns illuminated in the dark. A vast lawn with trees and bushes adorned by green lights. Outside the walls the chaos of the streets, inside the serene comfort. 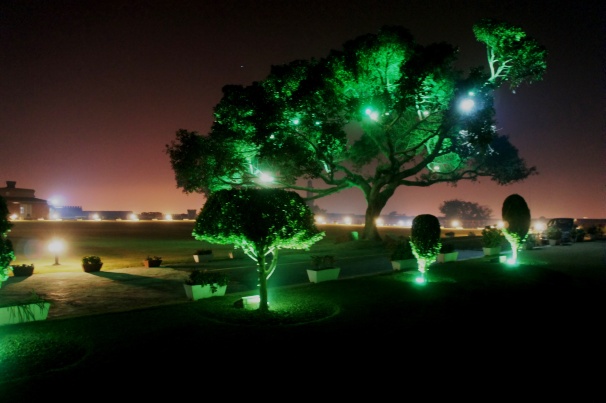 The soldiers welcomed us with the most delicious hot and sour soup I’ve ever tasted. We ate the starter outside, under beautifully lightened gazebo next to a wall depicting military struggles to safeguard its country’s freedom.

While waiting for the dinner, we walked into the main building. We passed by a few offices within the officer’s mess and the female part of our group headed towards the ladies room. The name turned out to be more literal than I expected. Adjacent to the female toilet was a large, comfortably fitted room with pastel decorations. Its walls proudly presented photos of Kalash women wearing their traditional colourful jewellery. The Kalash people are the smallest religious minority in Pakistan. This indigenous tribe centered around Chitral district within Khyber-Pakhunkhwa province we were visiting is known around the country for its unique culture. The Kalasha are not Muslims. In fact, they are polyteists centering their customs around natural forces. In Pakistan difference comes with a price however. Due to their religion the Kalash people have received death threats from the extremist groups such as Taliban. This lead to an outrage from the Pakistani public who generally take pride in the cultural diversity in their country and has lead to an increased security in the Chitral region provided by the Pakistani army. Guarded by guns, the Kalasha are free to cultivate their cultural identity.

In the central point of the room there was a painting representing some of the most extraordinary Pakistani women – ranging from the first female pilot and soldier to Malala. In the center of the painting the artist placed Fatima Jinnah, sister of the founder and first Governor General of Pakistan, Muhammad Ali Jinnah. Together with her brother, Fatima spent her life fighting for Pakistan –  a country formed on a dream to create a safe space for Muslims in Asia. A country formed out of a desire to break free from repression of the British Empire. A country escaping religious injustice. Pakistan – a nation’s dream of freedom.

Following a sumptuous dinner served by incredibly polite Pashtun soldiers, we went to another part of the fort. In the long corridors of the building’s basement we had a chance to learn more about the military history. Walking inside the walls of what used to be jail, I learnt about various guns, saw an old execution site and admired various war memorabilia. One of the items that particularly caught my interest was the ISIS flag which the Pakistani military managed to intercept during a fight against the terrorists. I found it ironic – while the world sees Pakistanis as terrorists, they are risking their lives to free that same world from the actual terrorism.

The walls of Bala Hissar fort got me thinking about the meaning of freedom.

Driving around the streets of Pakistan’s cities you are surrounded by walls. When someone says “on your left you can see a hospital”, most of the time it means you will see the wall surrounding the aforementioned hospital. Maybe the top of the building if you’re lucky.

Everything is guarded by walls – shopping malls, schools, houses. A typical residential street in Pakistan is lined  with homes lurking from above the brick partitions. The walls of freedom.

walled houses on a residential street

Pakistani society, as any collectivist culture, is governed by a set of social rules that nobody in their right mind would wish to break. And while these rules are widely accepted, they are often quite different in the comfort of one’s own home. A man wearing traditional clothes on the street can be the most liberal person at home; a woman with a modest headscarf may live the most lavish lifestyle.

This duality is reflected in the buildings. Dull grey wall can hide the most luscious green you’ve ever seen, a row of simple bricks can reveal the most elaborate architecture. On the outside all the houses may look the same, but it’s what’s on the inside that counts.

In Pakistan individuality is not flaunted around, it is more of a quiet secret, that only the beholder knows about. On the outside it’s safer to be the same, attract no attention, stay away from trouble.

The walls protect from others’ judgement but in the country touched by so many tragedies, walls create also a sense of safety and freedom. They form people’s private islands of comfort, places where one can be their true self, where one can go to sleep with the impression of safety.

But isn’t it the case for all of us? Don’t we all go through lives building walls around us? Don’t we all believe a few bricks and a pair of door will keep the evil of this world away?Don’t we fortify our hearts to protect them from being broken? Don’t we build glass walls in museums to keep the valuables out of reach? Don’t we fill our Facebook walls with things that are meant to present a certain facade to the world?  Maybe deep down we all have more in common with Pakistan than we think?

What are the walls of your life?

Albert Camus once said that “the only way to deal with the unfree world is to become so absolutely free that your very existence is an act of rebellion”.

The questions is, do we dare?